I love pickles and I always have. As a Jew and a native New Yorker, it is in both my nature and nurture so shouldn’t surprise anyone. Perhaps more surprising in that I’ve rarely actually made them and thus far never made my favorites, but we start simple and work our way up. These two varieties of refrigerator pickles are very easy and quite yummy. I made the Swedish-style sweet slices for the first time last year when I was getting many many cucumbers in my farm share and couldn’t come up with ways to use them up fast enough. I used the food processor’s slicing disk to make ultra-thin slices and the results were fantastic (and never lost their crunch!) For the sours, I wanted something heftier, so I sliced them thickly by hand. I had far fewer cucumbers this year (sadness), so it didn’t take too long. I used plain distilled vinegar, so the sours are quite sharp, whereas the sweet were in white wine vinegar. You could certainly use a nicer vinegar for the sours.

I wanted to can pickles this year and I’d tried to grow pickling cukes in my garden, but they didn’t really flourish. I ended up with many small ones, useful (& yummy) for one or two salads apiece, but not really appropriate for pickling, and I neglected to buy a bushel from a local farm. Ah well. Still, these were all nummy and quite popular at potlucks.

Both of these can be scaled as far up as you want to go and keep quite well, assuming you can keep them from getting et. 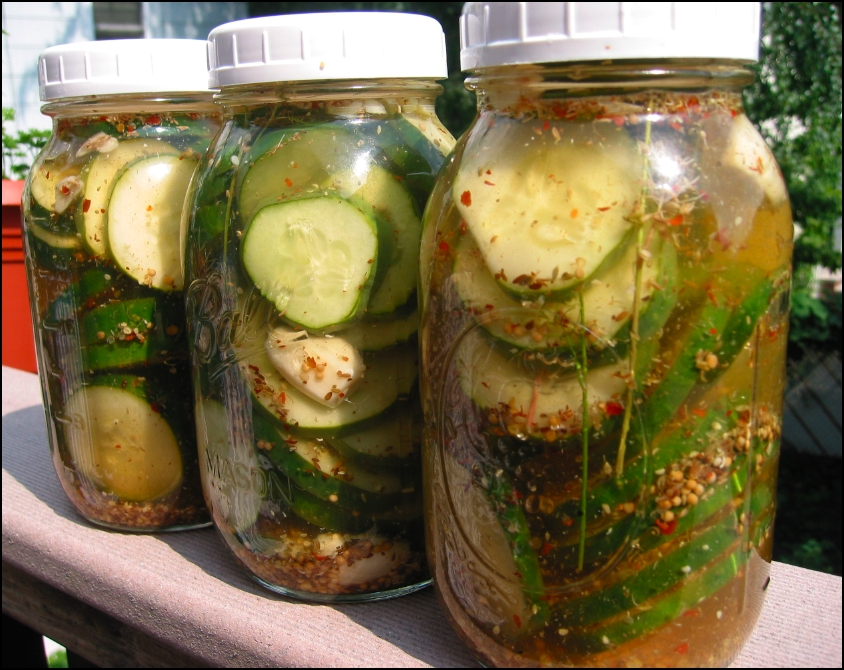 Sour Refrigerator Pickles (from this recipe)

2. Mix the next four ingredients (spices) in a small bowl, crush slightly to release flavors, and divide amongst the jars.

3. Mix together the water, vinegar, salt, and sugar in a large bowl or measuring cup and fill each jar, allowing the liquid to fill the caps and topping off and carefully topping off.

4. Cap the jars, shake ’em up, and refrigerate for at least two weeks before eating — the longer the better!

Notes: When you eat all the pickles, you can also refill the jars with more cucumbers and that works fine, too. Another option when making them is to heat the liquid (with the spices in it) to get things going a little faster. Despite the fact that I sliced them, these are NOT bread and butter pickles, and are quite sour, but I like it that way. In addition to munching on their own, they made very yummy additions to a grilled veggie dog or brat on a bun. 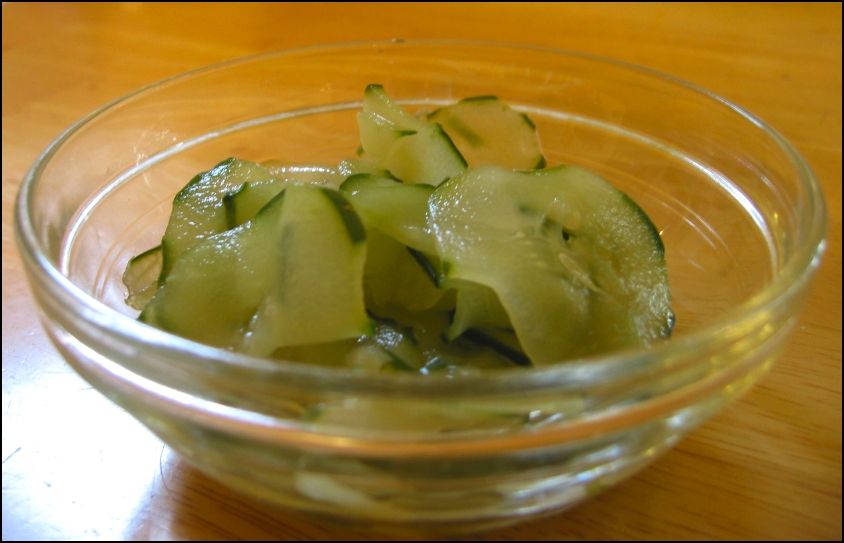 1. Slice the cucumbers very thinly (I used my food processor slicing disk), toss in a colander with the salt, and let them it while the rest of the dish is prepared, or up to 30 minutes.

2. Combine water, vinegar, sugar, bay leaf and allspice in a medium saucepan, bring to a boil, remove from heat, and allow to cool.

3. Rinse the salt off the cucumber slices and squeeze out as much moisture as possible, using paper towels to blot them dry.

4. Put the cucumbers in a medium bowl or jar along with the liquid, making sure the slices are completely submerged. Cover and refrigerate for at least 3 hours before serving.