Is the food blog back?  We’ll see, but for now, here’s something: my first ever stuffed shells!  I’ve been wanting to make these for a while and finally assembled all the ingredients.  The roasted tomato awesomesauce was part of the large quantity I put by in the freezer last summer, the chard was from the first farm share pickup of the season, and the basil came from the porch garden.

As it often my way, I looked at an assortment of recipes and combined them into something I thought would work.  The “ricotta” is mostly a cross between two different recipes in Veganomicon.  My original plan was to mix in spinach, but since I had the chard, used that.  Good thing, too, because without it, I would have been pretty short on stuffing, so definitely pick a green, or if you can’t stand the idea of vegetables mixed in, make extra ricotta.  You could also modify this recipe slightly for lasagna, which would maybe be a little less fancy but also save the stuffing time, though you’d have a higher pasta ratio.

The end result was quite delicious and I would definitely like to make this again.  Leftovers have been fantastic.  Even with the work of stuffing the shells, it was still pretty fast, and the most time-consuming part was our friend M. (who is a wonderful person, but a little slow in the kitchen) tearing and washing the chard.  But if you use frozen greens, this is *really* fast.

END_OF_DOCUMENT_TOKEN_TO_BE_REPLACED

Despite being a long-time veg*n and lover of bean curd in many forms, I was never really into marinating it. I’d tried, but it rarely seemed worth the trouble. Until I found this recipe in The Kripalu Cookbook, that is, and my life changed forever. Designed to be served cold, it is indeed delicious out of the fridge on its own or in a salad, but is also wonderful grilled, baked, fried, or just heated in the microwave. Even my self-proclaimed tofu-hating (and non-veg) roommate, who humors me by tasting whatever I cook, surprised us both by going back for seconds the very first time I made it, and, even more shockingly, has since asked me to make it again!

I usually cut the tofu into slices, but cubed it this time to facilitate skewering. It was hands-down the best grilled tofu I’ve ever had. 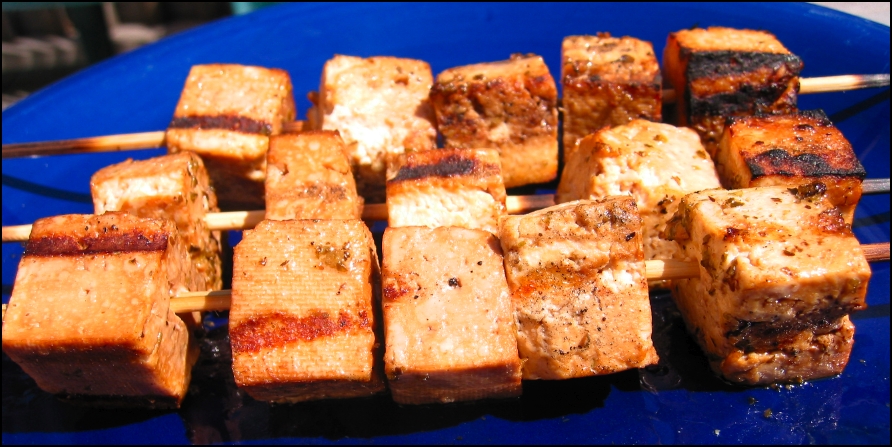